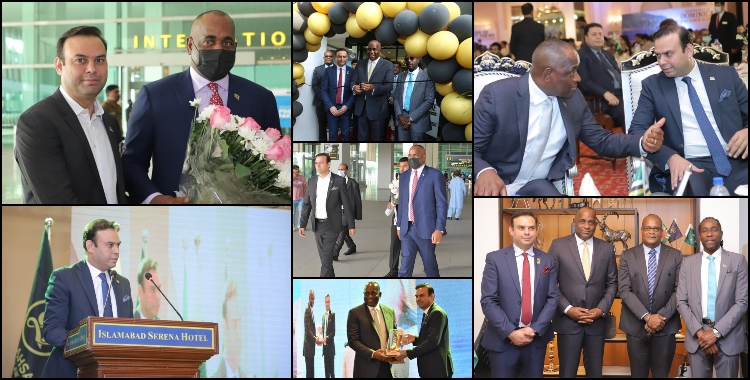 The arrival of the Dominican Prime Minister at Islamabad International Airport. Pakistan

A grand business conference was organized by Saad Ahsan Immigration Law Firm at Serena Hotel, Islamabad. Basically, the purpose of this event was to engage the well-known business community, traders, and other prominent people of Pakistan with the Dominican Delegation directly. Similarly, The objective behind arranging this event was to create great business, trading, and educational opportunities. These opportunities will be for the citizens of both countries Pakistan and the Commonwealth of Dominica.

Saad Ahsan Immigration Law Firm gave the investors and business community a great platform to discuss their ideas, concerns, and future plans with the Honorable Prime Minister of Dominica. Saad Ahsan in collaboration with the Dominica government is working on many other projects other than the citizenship by investment program. Some of these projects are purely devoted to education to benefit the citizens of both countries. Ahsan Khaliq in his welcome speech thanked Mr. Prime Minister, Dr. Roosevelt for visiting Pakistan on his invitation. He later shared his heartfelt gratitude towards Mr. Emmanuel Nanthan, who is the head of CBI Unit, Dominica. His services to promote the CBI program are commendable. Moreover, Ahsan Khaliq also greeted Mr. IAN A. W. Edwards, CEO of Tranquility Beach Resort for coming to Pakistan. Also, thankful for creating a project for investors to get great benefits from.Dominica Passport

The prestigious delegation and Honorable Prime Minister also addressed the people who came to attend the event. It was a very interactive yet informative event. Especially, for the people who are looking for future opportunities in Commonwealth of Dominica, this was once in a lifetime opportunity.

Want a call back from us?

This website uses cookies to improve your experience while you navigate through the website. Out of these cookies, the cookies that are categorized as necessary are stored on your browser as they are essential for the working of basic functionalities of the website. We also use third-party cookies that help us analyze and understand how you use this website. These cookies will be stored in your browser only with your consent. You also have the option to opt-out of these cookies. But opting out of some of these cookies may have an effect on your browsing experience.
Necessary Always Enabled
Necessary cookies are absolutely essential for the website to function properly. This category only includes cookies that ensures basic functionalities and security features of the website. These cookies do not store any personal information.
Non-necessary
Any cookies that may not be particularly necessary for the website to function and is used specifically to collect user personal data via analytics, ads, other embedded contents are termed as non-necessary cookies. It is mandatory to procure user consent prior to running these cookies on your website.
SAVE & ACCEPT