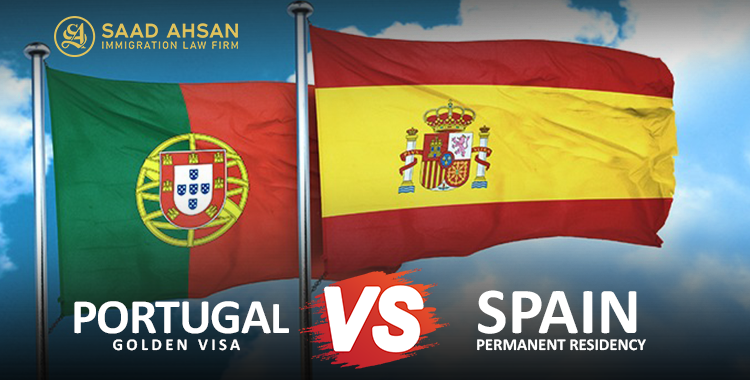 A few days back, while interacting with a client we thought to write on this topic. Our company deals in Multiple European residency programs and Portugal Golden Visa is the topmost choice. But sometimes, it gets very tricky to convince clients how one program is better for them than any other.

So this certain client was looking for a European Residency Program. The client’s inclination was more towards Spain as we get to see, read and hear more about Spain. It wouldn’t be wrong to say that Spain is a more famous tourist destination. But while you are looking for a country to relocate to or to expand your business, many other factors matter. Similarly, there aren’t many significant differences in all the European programs. In this article, we’ll give you an overview of the two most famous programs. We are going to mention all the requirements and benefits so you can figure out what’s best for you.

We also want to bring this to your knowledge that both the programs have started with a difference of only 1 year. But the number of successful cases see a huge contrast. Portuguese Golden Visa has approved approximately 10,000+ cases until 2019 whereas Spanish PR is granted to approximately 4500 foreign investors.

Portugal Golden Visa promises Citizenship after 5 years of Residency which no other European program offer.

Portugal Golden Visa takes 8-12 months to complete the process. The final approval can take a bit longer in rare cases if there is an issue.

Portuguese Golden Visa has no such residency requirement. In order to get citizenship, residents are required to live for 35 days in 5 years. It makes 7 years per year which is convenient enough for investors.

In the Education Quality Index of the European Region, Portugal has a 59.1 score which is better than many other countries in the region.

Spanish Permanently Residency or Spanish Golden Visa was introduced in 2013. Until then, there are only two options for investors to get Permanent Residency of Spain. Investors usually lose interest in the program because of limited investment options in the real estate of Spain.

The minimum investment to get a Spanish golden visa is EUR 500,000 which is a lot for foreign investors.

Whereas, Spanish PR doesn’t guarantee you citizenship after 5 years. Maximum chances are after 10 years.

Spanish Golden Visa processing time is 30 Days as per Spanish authorities. This is one of the fastest European Residency Programs.

In the case of the Spanish Golden Visa, residents need to live for 5 years in Spain. It is like spending maximum time in the country as a resident status if you wish to get citizenship.

Whereas, Spain has a 56.1 score in the Education Quality Index which is obviously less than Portugal and a reason why Portugal has to be your preference.

What are the similarities in the program?

Want a call back from us?

This website uses cookies to improve your experience while you navigate through the website. Out of these cookies, the cookies that are categorized as necessary are stored on your browser as they are essential for the working of basic functionalities of the website. We also use third-party cookies that help us analyze and understand how you use this website. These cookies will be stored in your browser only with your consent. You also have the option to opt-out of these cookies. But opting out of some of these cookies may have an effect on your browsing experience.
Necessary Always Enabled
Necessary cookies are absolutely essential for the website to function properly. This category only includes cookies that ensures basic functionalities and security features of the website. These cookies do not store any personal information.
Non-necessary
Any cookies that may not be particularly necessary for the website to function and is used specifically to collect user personal data via analytics, ads, other embedded contents are termed as non-necessary cookies. It is mandatory to procure user consent prior to running these cookies on your website.
SAVE & ACCEPT